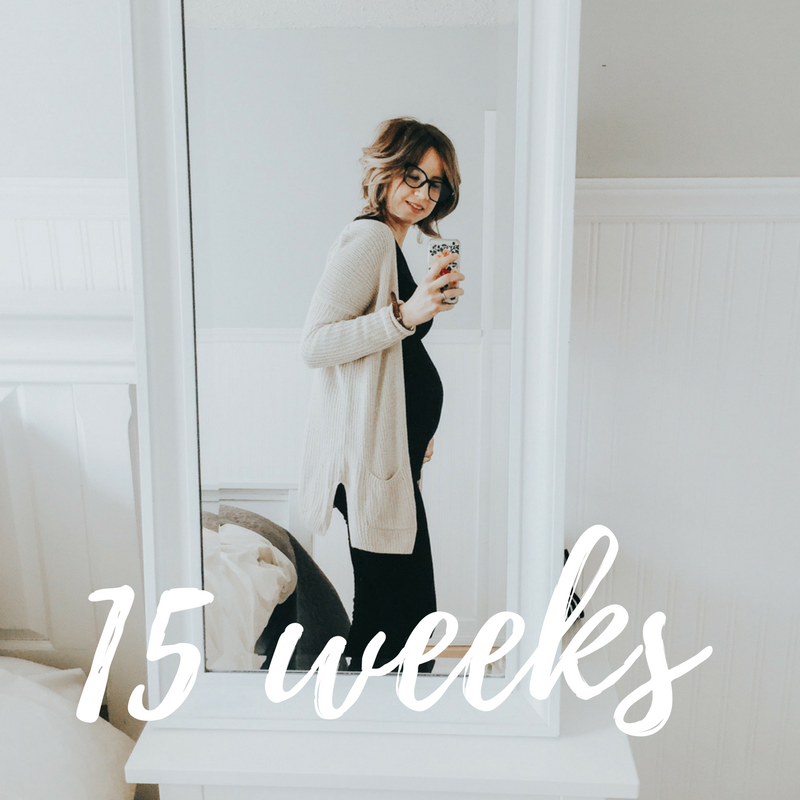 How Far Along: I’m 15 and a half weeks and can’t believe how fast the time is going! I remember the weeks going by so slow before we announced and now it feels like our babe will be here before we know it! We heard babies heart beating loud and clear at our midwife appointment this morn. The twins were so excited to finally be able to hear it, and of course I was too!

Size: The baby is the size of an apple and definitely growing every day! My belly is pretty small when I first wake up in the morning but get a good breakfast in there, and I am SO pregnant.

Weight Gain: Ok guys. I feel really hesitant to post this here because I’m slightly embarrassed by it but I’ve already gained 12 lbs just in first trimester :S :S ugh. See I think I’m frustrated because I had worked so hard the past year to get in shape and was so ambitious and excited about having a fit and healthy pregnancy. I had planned to keep up with my workout routine and maintain a healthy balanced diet. Well that worked out well for the first 5 weeks? And then it went downhill from there. And Christmas didn’t help. As I mentioned in my last pregnancy post, I had aversions to most veggies, meat and even some fruits for the longest time. Things are starting to get better so I hope everything balances out (including my weight ha!) I’ve been slowly getting back into a workout routine a few times a week and trying to bring all the healthy greens back into my diet because I know that’s important for both me and baby. But it definitely hasn’t gone the way I planned and I just have to be ok with that.

Sleep: I’ve been sleeping fine (except when the twins still wake me up once and while). And then I sometimes have trouble getting back to sleep.

Symptoms: I get morning sickness the odd day here and there but I haven’t actually been sick yet. I’ll just feel super nauseous while putting on my makeup or making the twins breakfast and I’ll have to grab a glass of water and just lay down for a few minutes until it passes. Sometimes the smells of certain foods make me feel sick but again not the point of actually being sick. The biggest thing I’m still battling is the migraines. I seem to get about one a week that lasts around 3 days. 🙁 We think it’s mostly tension related as I have A LOT of tightness in my neck and shoulders. So I’ve gotten two massages this week in hopes that it will start to relieve some of that and Ron has me doing a daily stretch routine as well. Hoping they let up soon because it’s not fun caring for noisy two three year olds while your head is non-stop pounding. I think that’s it for symptoms except for being exhausted. I’ve made it past 8 pm a handful of times the past couple weeks though so I think I may be starting to get some of that second trimester energy back woot!

Movement: Yes I’ve already felt movement! I started to feel little flutters for the first time around 12.5 weeks but wasn’t sure if it was just gas bubbles or I was just imagining it. But the flutters have been pretty consistent since then and my midwife told me today it’s totally possible as you feel it much sooner in your second pregnancy. Ron even felt a little kick on the outside the other night when we both had our hands on my belly in silence for a while. So surreal and probably my favourite part of pregnancy…feeling that little life inside of me move and kick around.

Food Cravings: Mostly still sweet things. I was definitely having too much chocolate in first trimester so now I’ve started to replace it with a bowl of fruit or an apple and peanut butter. And ok total disclosure here: I went through a about 2 weeks of eating Mcdonalds. Like full out big macs and fries you guys…totally gross and not like me at all. I don’t even know what got into me but I literally couldn’t stop myself from driving through the drive through and ordering. Thank goodness that is over. Our family has actually been moving towards a plant based diet since then and I’ll be sharing more about that in another post!

Names: We don’t have anything definite yet but we do have a running list which we will probably nail down as soon as we find out the gender…which is in just 3 WEEKS! EEEEK!!!

So I think that’s about it for 15 weeks. I’m so anxious to get working on the nursery and have been reluctantly resisting the urge to buy all the cute baby things. Can it just be July already?!?!

haha thanks so much for reading!!!