I promised I’d be sharing each room as we work on purging/organizing and living with as little as possible. With what we have gotten rid of already, it’s been so freeing and there is still SO much more to go. I had no idea how long the process would take. At first I’d be like “Today during naptime, I will do the kitchen!” Well 3 hours and 2 cupboards later….not so much. But then again, I was not only purging things but also transferring spices, cereals etc., to different bottles and containers as well as labeling them so it was quite a time consuming task. But SO so worth it you guys. I’ve found that as we’re purging, organizing at the same time has been KEY. I don’t want to just slowly replace the empty space from the things we purged with new stuff. That would totally defeat the purpose. The idea is to live with LESS going forward so if everything has it’s own spot and we have everything we need, it will be easier to not buy anything more. Make sense?! 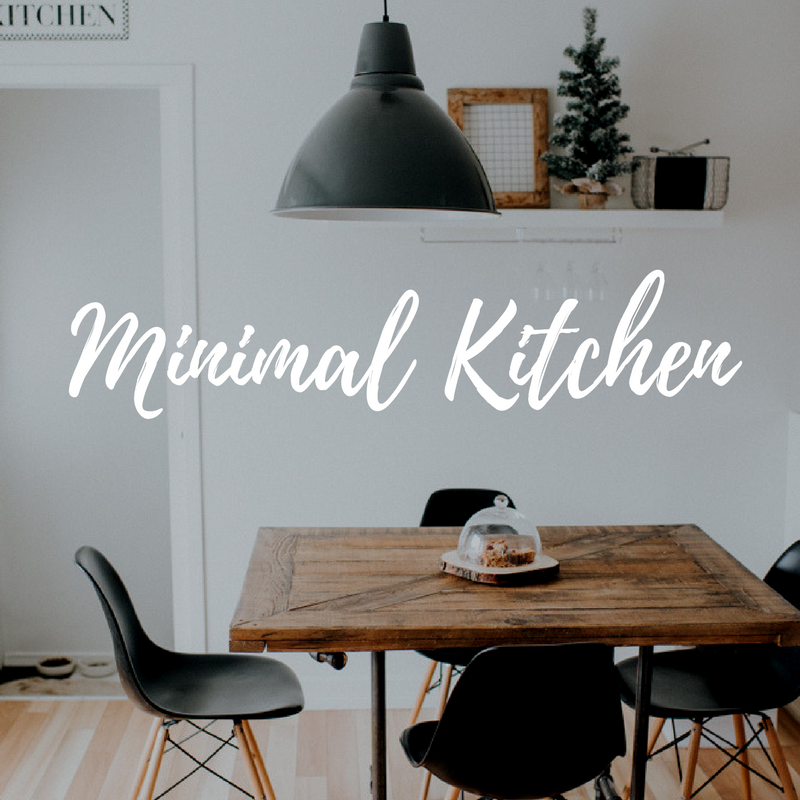 So here’s what we organized/got ride of:

Cereals: Storage containers can be EXPENSIVE but you’d be surprised how much the dollar store has! Most of my mine are from there! 🙂 Putting our cereal, oatmeal, rice, etc., into containers has been so helpful! Just love how organized it is and we can easily see what we need more of for our grocery shop each week. 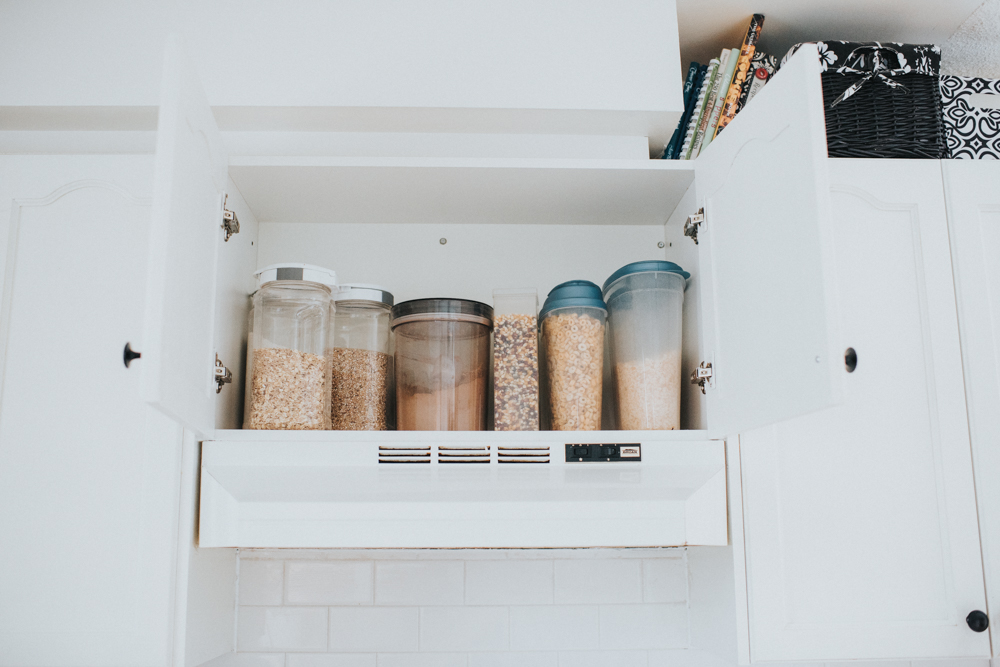 Tons of mismatched glasses and mugs. How many do you REALLY need?! We each have our fav mug that we use on a daily basis, so why do we need like 10 more each? We basically cut our collection in half. And I got rid of like 20 mason jars that had just been collecting dust in another cupboard. I used them for punch for parties and such in the past but haven’t used them in so long and I don’t plan on pickling or jamming anytime soon so off they went! (Don’t worry, we have another cupboard beside with all the dishes we KEPT, not pictured! But those empty shelves in this photo were filled with all the ones we never used!) 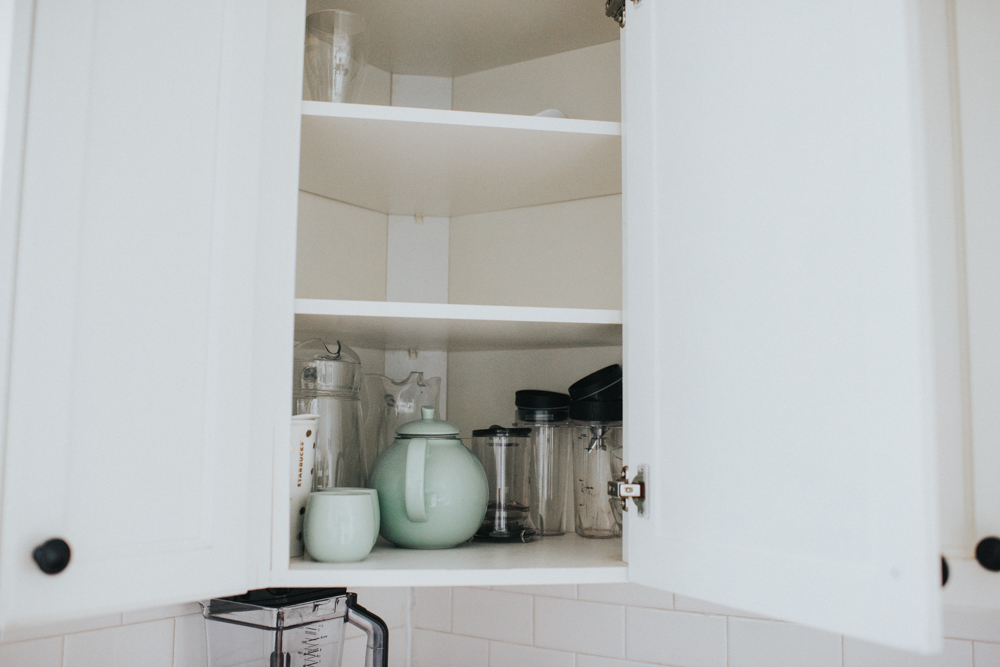 Tupperware. As you can see we now have a small stash in the photo below. It used to be stored in the huge corner cupboard. We had SO much we never used and a lot of it was mis-matched but we were just keeping it in case we found the right lid? Ron’s the only one that takes food to go on a daily basis and we just need a couple containers for packing away left overs. NOT a million. 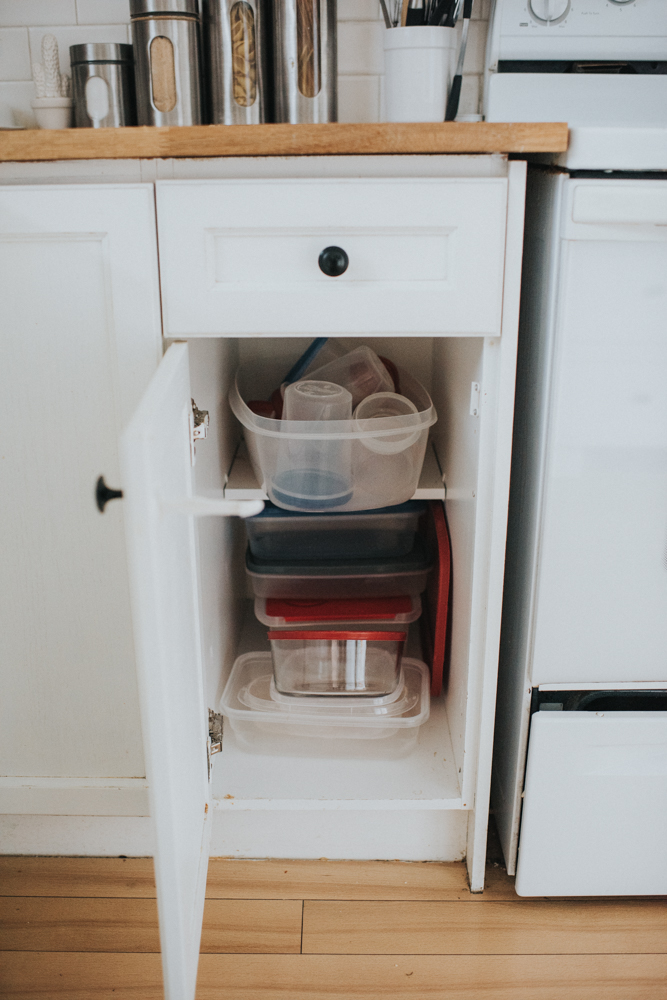 Canned goods/boxed foods. We had a lot of stuff that was sitting in our pantry cupboard that was expired and a ton that I knew we would never use. So for a clean fresh start, we donated the good stuff to a local food bank and got rid of the rest.

Again, all the jars and containers are from Dollarama and the plastic white bins on the bottom shelf actually come with little scoops! Perfect for flour, sugar, etc., 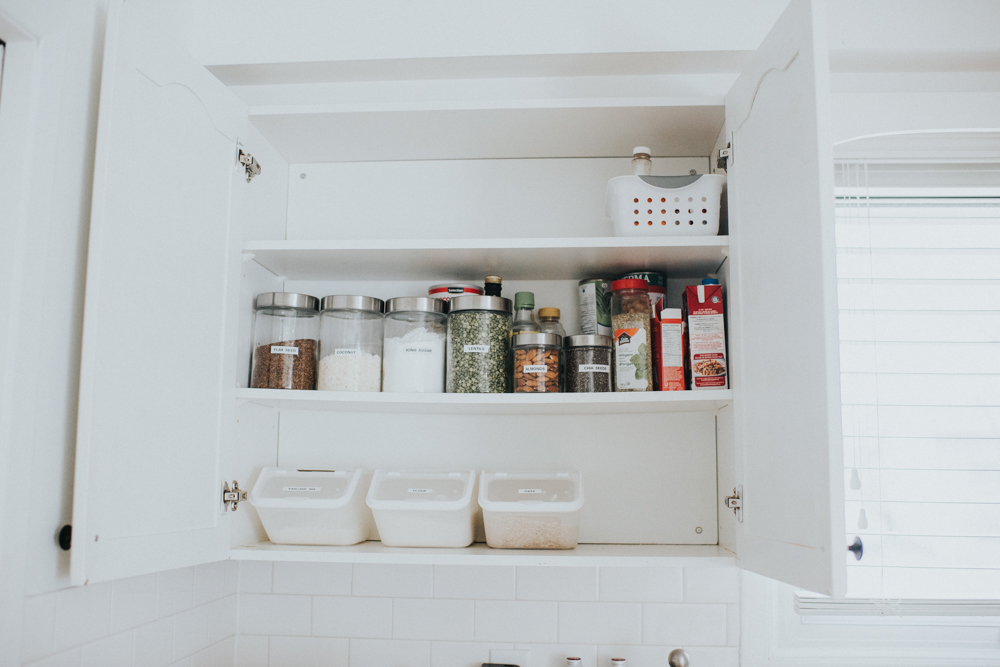 And this is so super embarrassing but just to be real and show you what things looked really like BEFORE…maybe it will be a little relatable or maybe we were just living like complete slobs. Either way, below is the very same cupboard before we made the spice drawer pictured below and got rid of so many things. 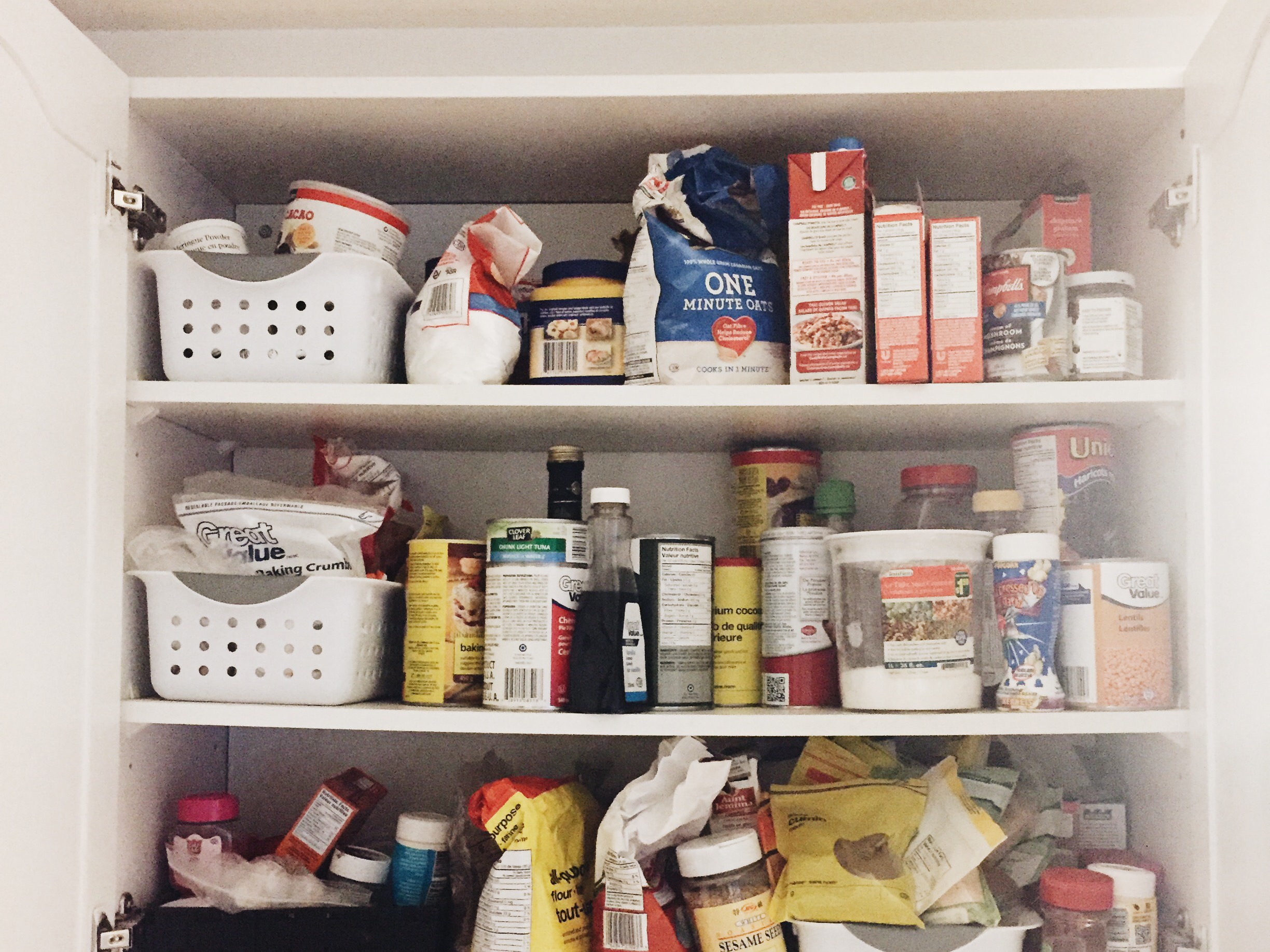 Extra serving dishes/pots and pans – we didn’t have a huge over supply of these but there were a few things we have never used sitting in cupboards collecting dust so off they went.

Dish rags and towels – don’t need a hundred of these. Thats what our washing machine is for. We kept a minimal stash in a small drawer.

Spices – Our spice collection was so out of control. We had them all in the bags they came in stuffed in baskets in a cupboard (as pictured above). I used to actually think that was organized because they were all in one basket (the spice basket) but it was not a good system. We had quite a few doubles because we never knew what we had and would often accidentally re-buy things for new recipes. I had to do a lot of combining/throwing some of it out and Ron made this awesome DIY spice rack that literally took 20 min to put together. It’s in the drawer right beside our stove now so easy and accessible for cooking! The bottles are from the Dollarama! 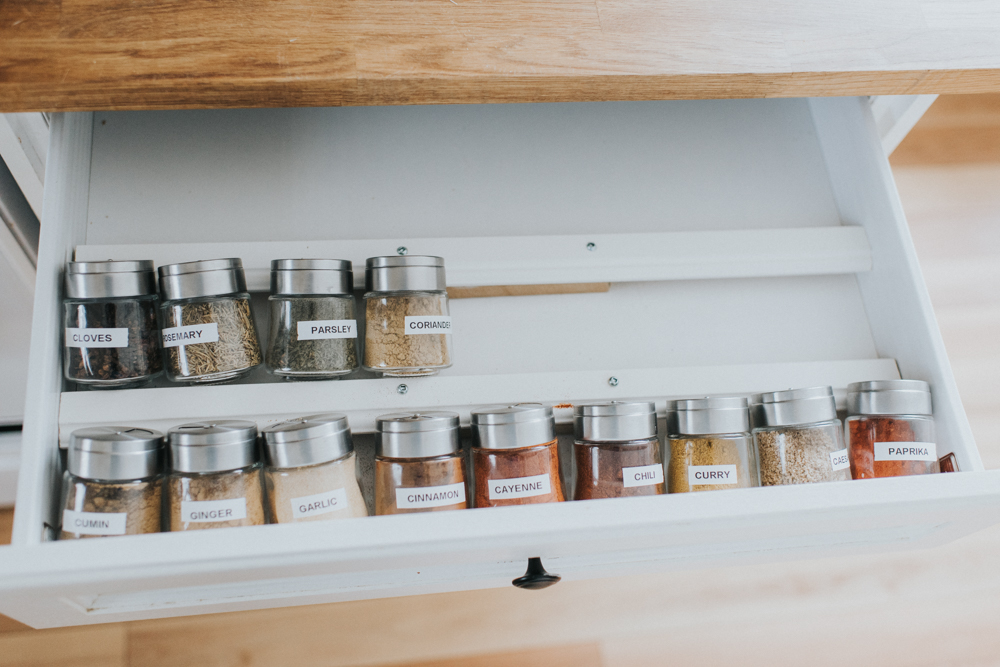 The kids dishes – ok this was a big one! We had like 30 plastic spoons. What?! We run our dishwasher daily so we definitely could afford to lose some of those. Same with plastic cups, bowls, and plates. I don’t how that collection piled up so fast! (I blame it on all the cute dishes at Target when it was still here!) We kept the twins 3 plates and bowls each. Enough to go around if we have a play date with friends and enough to get through all meals and snacks on an average day. Same with the cups! 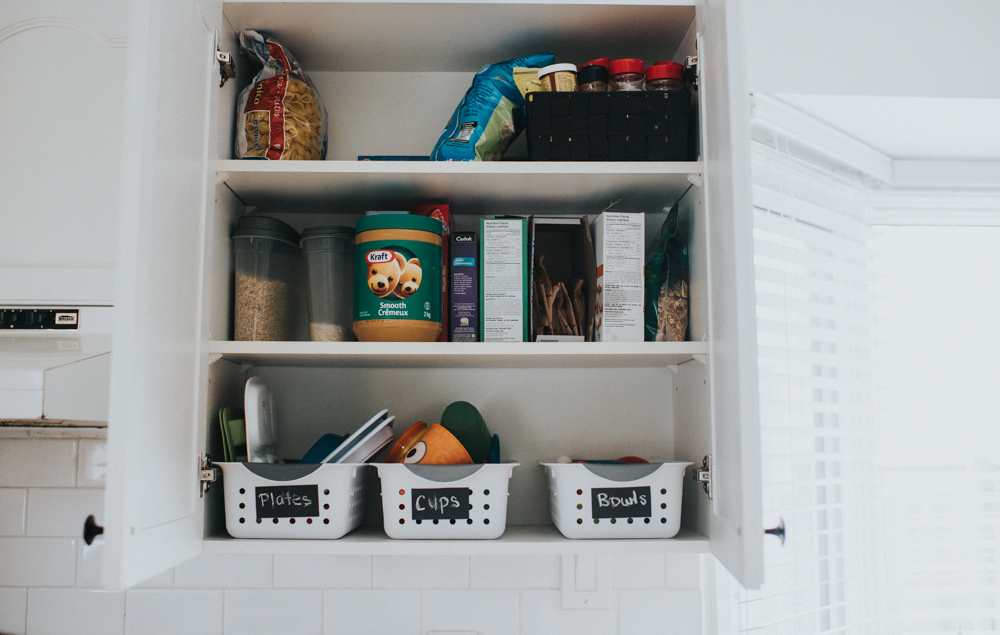 This drawer used to be our “mismatch drawer” All this stuff was just in there loose and things were always getting stuck or tangled together. Now, everything has a spot. A basket for cookie cutters, a basket for clips, and two baskets for measuring and other cooking tools. 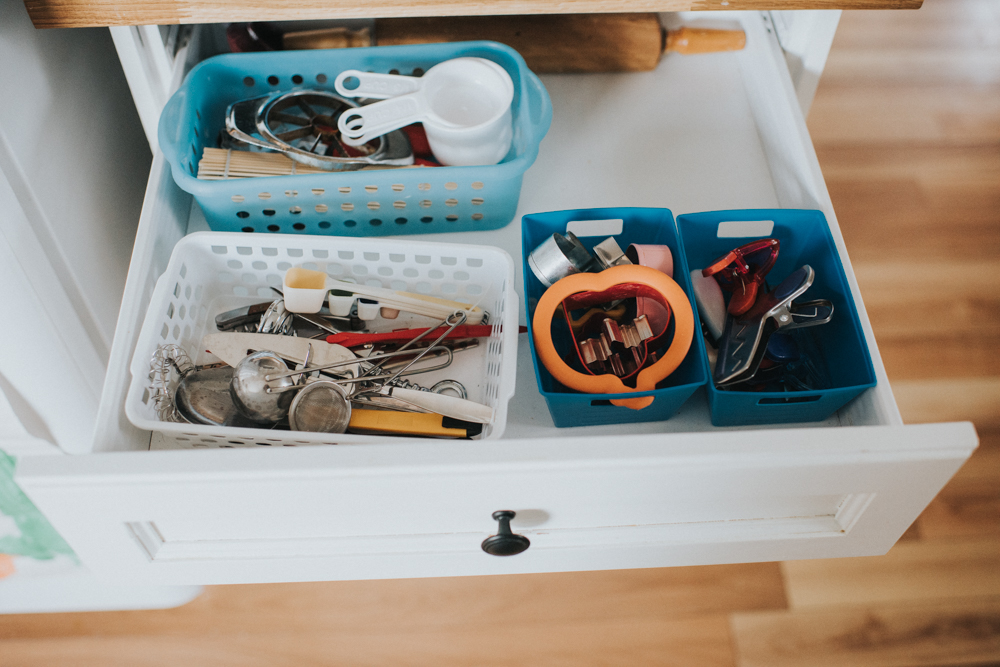 Appliances you’re not using – There were a couple big things we hadn’t used in YEARS that were taking up so much space in our cupboards. One of them was a portable grill Ron used in university but never once since then (it took up a third of the space under our kitchen sink). We also had a old blender that still worked but was cracked (not sure why were keeping it…again, just in case? We have a brand new one!) Also a couple gimmicky items that had been given to us around our wedding or showers and we had never touched. Getting rid of those larger things gave us so much more SPACE! 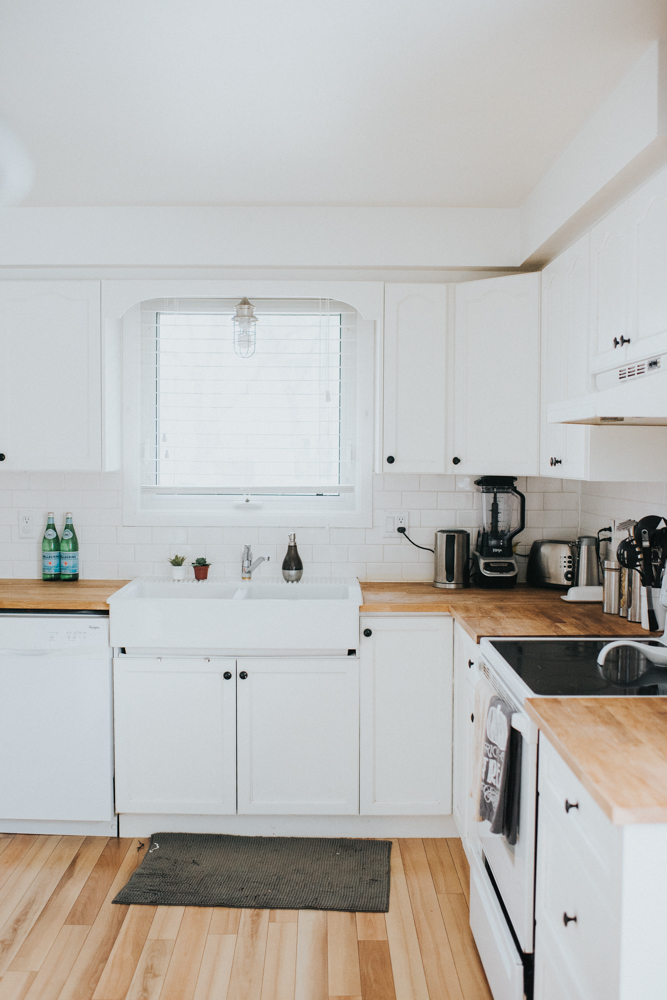 Our kitchen makes me so happy now instead of stressing me out! I would always get so flustered when cooking dinner because I could never find things or nothing fit when I was trying to put it back. I was convinced we had outgrown it and I needed a much bigger one. But nope, just needed to get rid of a whole lot of un-used items and make sure that EVERYTHING has a spot. 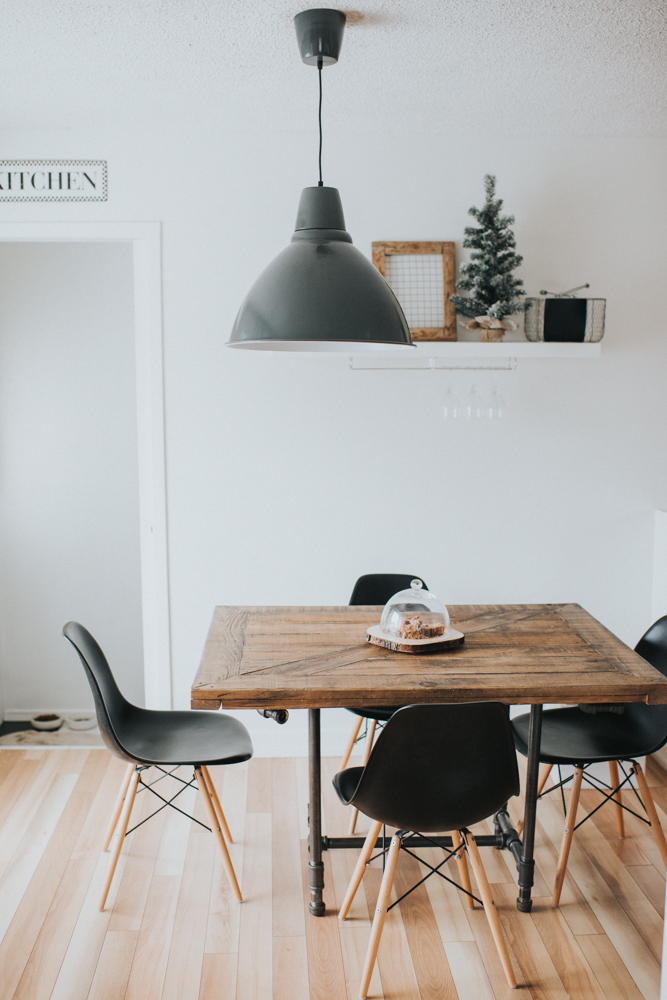 Sooo if this has inspired you in the least bit, happy kitchen purging/organizing! Thanks so much for reading!