If you’ve been following along with my blog the past few months, you’ll know that our family has been on a journey towards living a minimalist life. (You can view our minimal kitchen HERE!) So what does this actually mean? For us, it’s not just about getting rid of stuff, but it’s about living a life with intention…in every area. Our home, our calendar, our relationships. It’s been quite the journey but we’re already seeing the benefits of the changes we’ve made thus far and it’s been so so freeing. 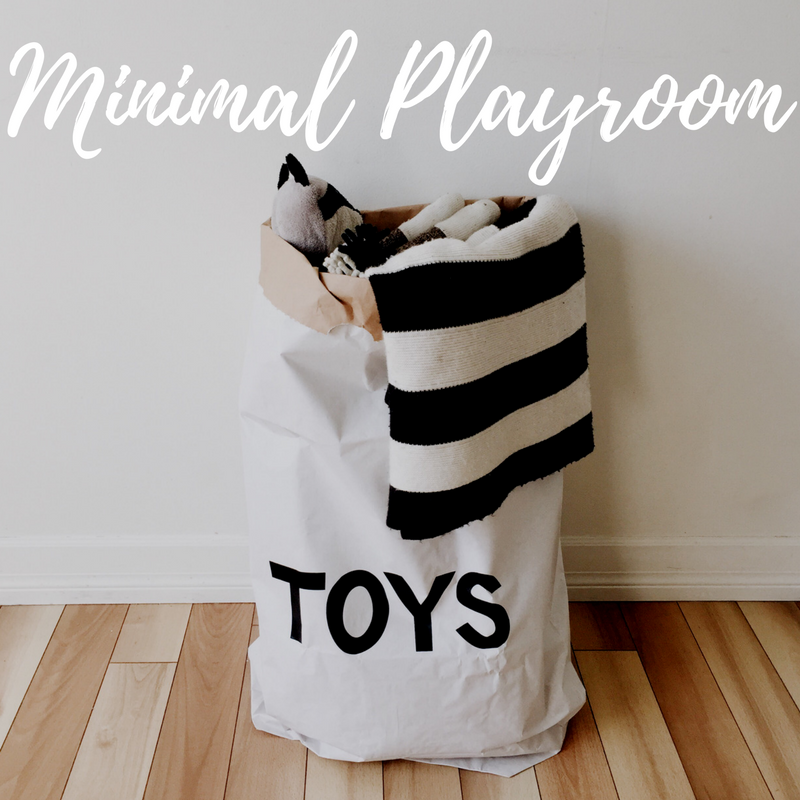 Today I want to share what we’ve done in our playroom as I know a lot of parents would argue that it’s impossible to have a minimal and tidy home with children. I mean doesn’t everyone tell you (in baby mags, blog posts, and on pinterest) everything that you need when you have kids. I mean seriously, right from the newborn stage and as our children grow into toddlers and then reach school age, we feel the need to provide them with so much stuff. I’ve come to realize how wrong this way of thinking is. Living with less, has proven to not only be freeing and beneficial for myself and my husband but for my kids as well. It’s completely changed the way they play and interact with each other and I’m so excited to share HOW! 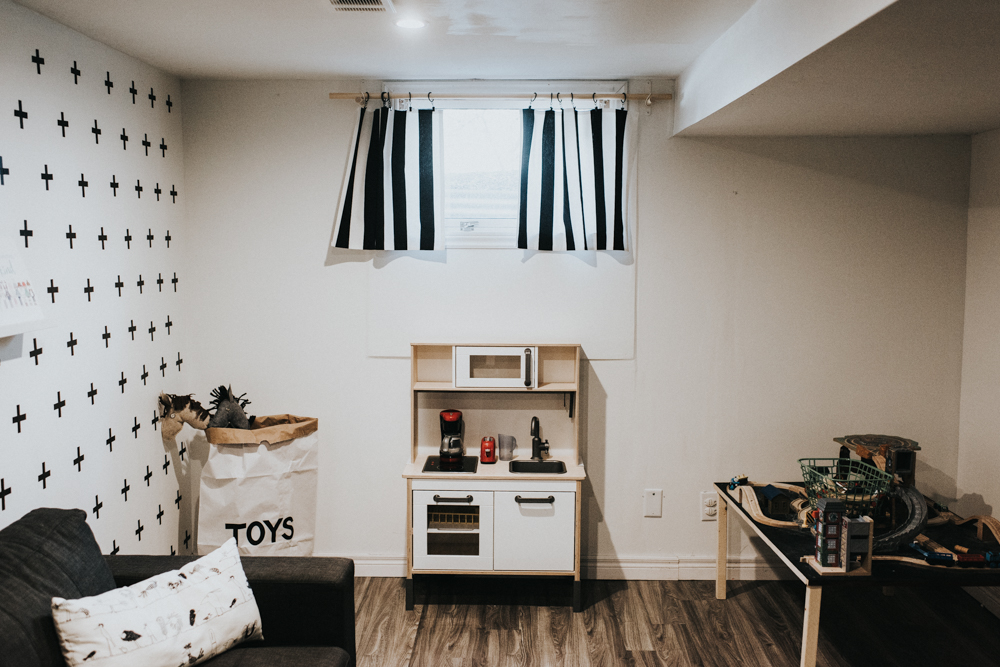 We have literally gotten rid of garbage bags of toys, books, stuffed animals, etc. from both their bedroom and playroom over the past few months and they haven’t missed a single thing! At first, I began the mission on my own, during nap-time or when they were asleep at night and for real, they never noticed that things were disappearing. They would just tell me how much they loved the open space. They noticed right away that there was more space to run around and play instead of every square inch of the outside of our playroom occupied by toys or toy storage. (I wish I took some before shots but our playroom was a disorganized clutter filled MESS.) But then I read somewhere that it’s important to make our children part of the process of de-cluttering/minimalizing, teaching them from a young age to have a healthy view of their stuff. I want to teach them that the items we own, should enhance our lives, and not hinder them. Therefore, I have started to talk to them about donating items to other children who would have a better use for them. We talk about which toys they haven’t played with in a very long time and why it’s time to remove them from our play space to give us more space to play with the things we do have. So while I used to sneakily get rid of things while they were at pre-school or in the evenings, I now allow them to see me dropping off their old toys at the local Goodwill, or giving them to a younger friend who would get better use from them and they are starting to get joy out of this. I love that they’re learning not to become too attached to material things from such a young age. 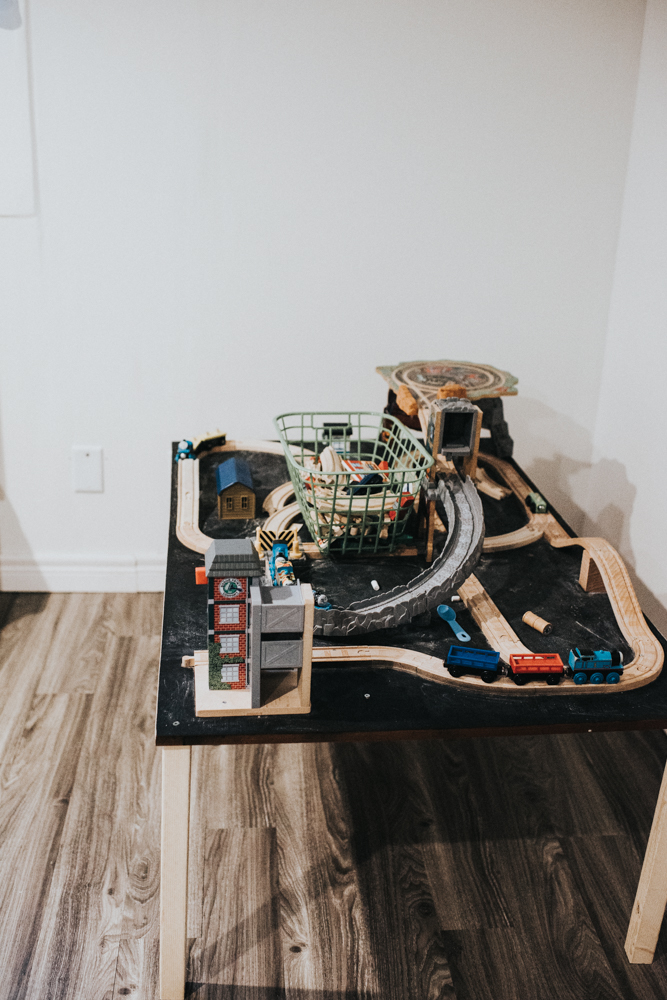 So what have I noticed about the difference in their play? In the past, I would go down to their playroom after a half hour of them being down there and there would be toys EVERYWHERE. Not that that’s a bad thing…I mean what’s a playroom for right? They’re welcomed to make all the mess they want while they’re playing. But it was evident with the time that had passed, that they never stuck with one activity for more then a few minutes. They were overwhelmed with all the choice and would hop from one bin to the next, dumping, playing for a few minutes then moving on to the next thing. I don’t blame them one bit, I would be the same way with so many options!  Their play was not focused or intentional. It was scattered and disorganized, like our home. Now, every toy we have down there serves a purpose, we have removed the clutter, we have removed everything mismatched and everything that wasn’t enhancing their play. For us, this was A LOT of plastic…silly items we had grabbed over the past years at yard sales, toys that were missing pieces and parts, old happy meal toys, extra stuffed animals, etc., Most of those white bins below used to be stuffed to the brim with mismatched items. Now, everything has a spot, a designated home. We have one bin for playfood, one for toy animals, one for balls, one for cars and trucks, one for instruments and one bin for odds and ends (mr. potato head, a fishing game they love, a doctors kit, etc.,)

They are really into building and constructing lately so they have a separate small expedit in their room with duplo, lego, and bright builders. We also have a puzzle cupboard in our upstairs living room as well as a games closet where we store all the board games we own. Other then art supplies, playdough etc., this is the extent of their toys you guys.

So now, they will literally go down to the playroom for an hour and a half together and be so engrossed in a game of make believe that I have to go down there and sadly end it so we can eat supper or head out for an errand. Their make believe games include grocery store, fire station, beach day (where they use my blue yoga mat as water ha!) and they often pretend the spare room next door is a hotel and set up a restaurant and everything. Some days they’ll play trains for a good 30 min and their absolute favourite game right now (since they got mini sticks and nets for Christmas) is hockey because now they have enough ROOM to play it! Their play in general is so much more focused and they spend twice or three times as long as they would in our playroom then when there were SO many more toys! Sounds ironic huh? Try it…I promise you you’ll see the difference. 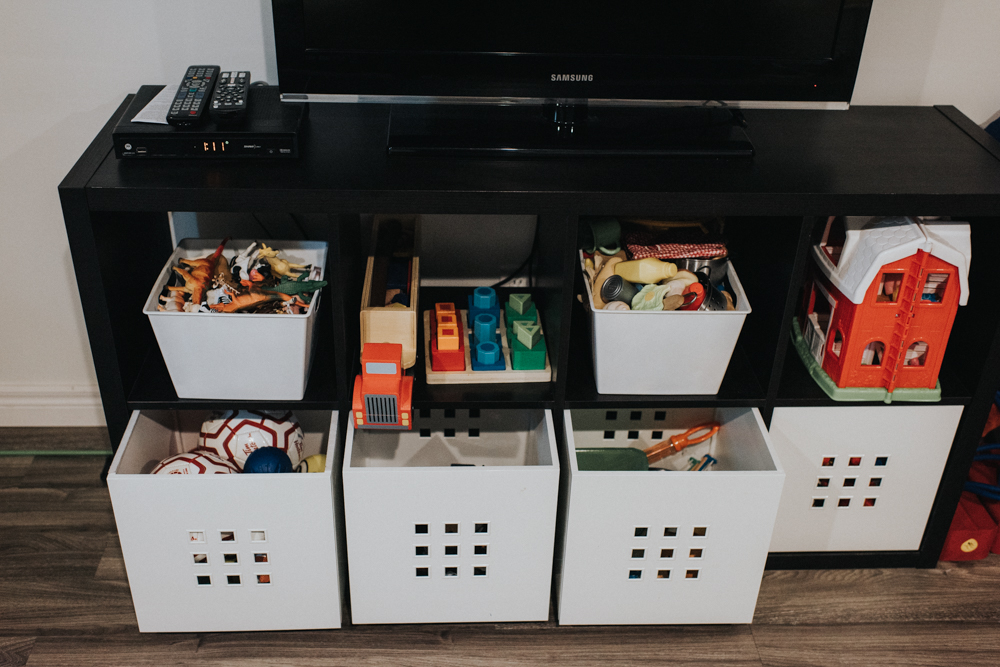 While I did such a large initial purge of the playroom, it’s important to note that this is an ongoing process. They have grandparents who like to spoil them and they’re always getting little knickknacks from birthday party treat bags, souvenirs when we’re on holidays, birthday and Christmas presents etc., so we need to constantly be purging in order to maintain a minimal play-space. But it’s SO worth the up-keep to see them so much more creative and focused with their play.

And every good play room needs a chalk wall right? This one has been well used!!

A dress-up collection is another essential in my opinion! This was theme of their Christmas gifts two years back and they’re really just starting to use them now! 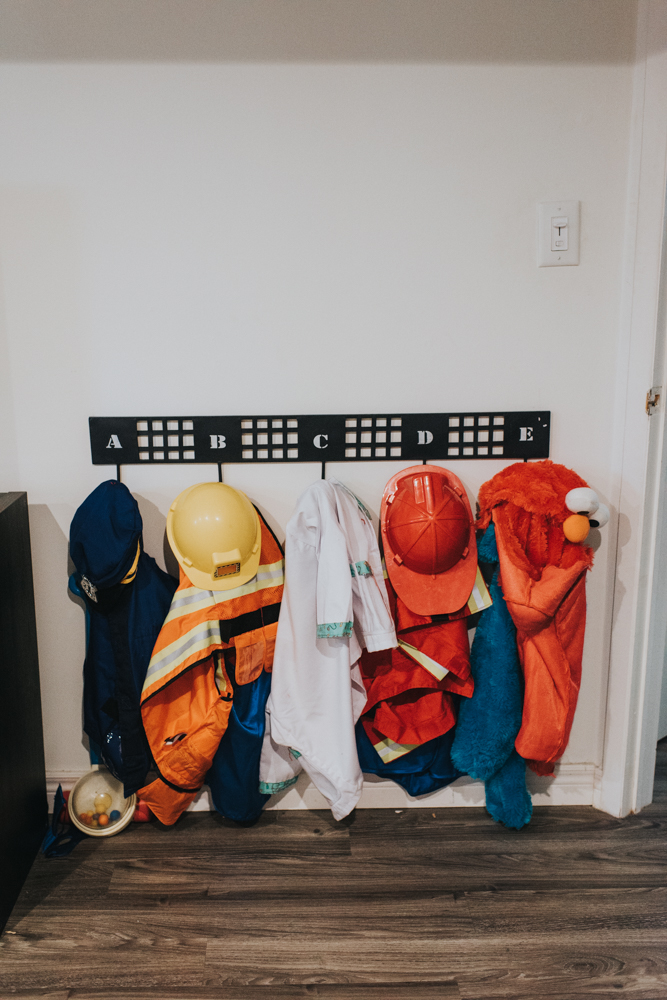 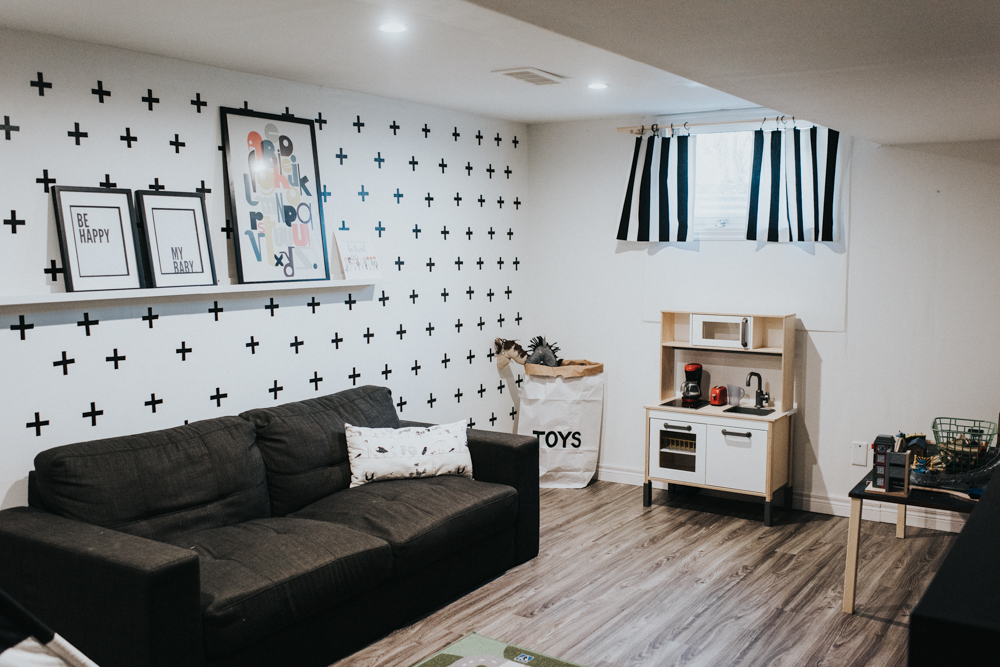 So that’s how we’ve minimized our play room and the benefits we’ve seen from it! Hope it’s inspired you a little? Thanks so much for reading!